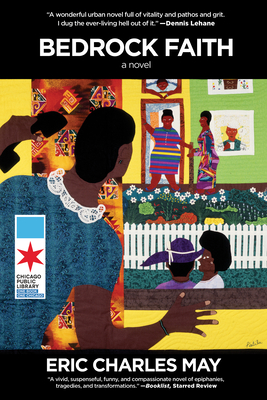 One of Roxane Gay's Top 10 Books of 2014 One of Booklist's Top 10 First Novels of 2014 One of the Chicago Reader's Favorite Books of 2014 A Women's Book Group Discussion Selection, Women & Children First Bookstore One of O, The Oprah Magazine's Ten Books to Pick Up Now, April 2014 Shortlisted for the 2014 Great Lakes Great Reads Award Longlisted for The Morning News's 2015 Tournament of Books One of Five Books to Read Now, Chicago Tribune/Printers Row Eric Charles May was named one of 25 Writers to Watch by Guild Literary Complex and one of the Lit 50 2014 by Newcity Named a Notable African-American Title by Publishers Weekly In this vivid, suspenseful, funny, and compassionate novel of epiphanies, tragedies, and transformations, May drills down to our bedrock assumptions about ourselves, our values, and our communities. As sturdy as a Chicago bungalow and bursting with life, May's debut is perfect for book clubs.
--Booklist (starred review) In May's vivid, suspenseful, funny, compassionate and epiphanic first novel, the decorous Mrs. Motley, a retired librarian, along with her close-knit, gossipy Chicago South Side community, dreads the return of the notorious Stew Pot Reeves.
--Booklist, naming Bedrock Faith a Top 10 First Novel of 2014 May's expansive first novel reveals the complicated emotional economy that holds together a neighborhood in crisis...May's vivid descriptions of the rhythms of life in the suburb...reveal vibrant lives in ordinary houses.
--Publishers Weekly After fourteen years in prison, Gerald Stew Pot Reeves, age thirty-one, returns home to live with his mom in Parkland, a black middle-class neighborhood on Chicago's South Side. A frightening delinquent before being sent away, his return sends Parkland residents into a religiously infused tailspin, which only increases when Stew Pot announces that he experienced a religious awakening in prison. Most neighbors are skeptical of this claim, with one notable exception: Mrs. Motley, a widowed retiree and the Reeves's next-door neighbor who loans Stew Pot a Bible, which is seen by Stew Pot and many in the community as a friendly gesture. With uncompromising fervor (and with a new pit bull named John the Baptist), Stew Pot appoints himself the moral judge of Parkland. He discovers that a woman on his block is a lesbian and outs her to the neighborhood, the first battle in an escalating war of wills with immediate neighbors: after a mild threat from the block club president, Stew Pot reveals a secret that leaves the president's marriage in ruin; after catching a woman from across the street snooping around his backyard, Stew Pot commits an act of intimidation that leads directly to her death. Stew Pot's prison mentor, an African American albino named Brother Crown, is released from prison not long after and moves in with Stew Pot and his mom. His plan is to go on a revival tour, with Stew Pot as his assistant. One night, as Stew Pot, Mrs. Reeves, and Brother Crown are witnessing around the neighborhood, a teenager from the block attempts to burn down the Reeves home. He botches the job and instead sets fire to Mrs. Motley's house. She is just barely rescued, but her house is a total loss and she moves in with a nearby family. Neighbors are sure Stew Pot is behind the fire. The retaliations against Stew Pot continue, sending him over an emotional ledge as his life spirals out of control with grave consequences. Through the unforgettable characters of Stew Pot and Mrs. Motley, the novel provides a reflection on God, the living and the dead, and the possibilities of finding love without reservation.

Sh!t No One Tells You: A Guide to Surviving Your Baby's First Year

It's Not My Fault: 150 Hilarious Excuses Every Tennis Player Should Know