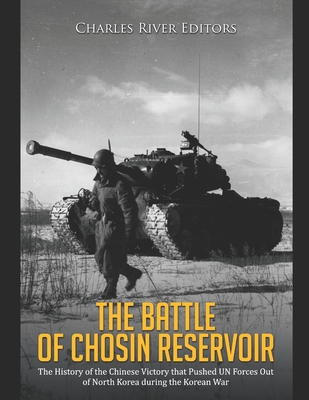 The Battle of Chosin Reservoir: The History of the Chinese Victory that Pushed UN Forces Out of North Korea during the Korean War

*Includes pictures
*Includes a bibliography for further reading
It seems strangely difficult for some to realize that here in Asia is where the Communist conspirators have elected to make their play for global conquest, and that we have joined the issue thus raised on the battlefield; that here we fight Europe's war with arms while the diplomats there still fight it with words; that if we lose the war to communism in Asia the fall of Europe is inevitable, win it and Europe most probably would avoid war and yet preserve freedom. As you pointed out, we must win. There is no substitute for victory. - Douglas MacArthur, 1951.
The Korean War is often labeled the forgotten war, and though it has received renewed attention in recent years, it still pales compared to others in recent history, like the Vietnam War or even the more recent wars in Iraq and Afghanistan. What's mostly overlooked is that the Korean War was one of the most intense conflicts the United States fought, and the soldiers who served in it were arguably in greater peril than in any other war over the last 75 years. While the Truman administration and the Chiefs of Staff had a clear plan for the conflict, seemingly everything went horribly wrong once China entered the conflict, and despite the United Nations coalition forces' technological and logistical superiority, they found themselves on the defensive.
The Battle of Chosin Reservoir was a dramatic example of a battle plan gone awry. General Douglas MacArthur had conceived of a triumphant march to the Yalu River, ending the war and uniting Korea. The UN troops, led by the United States, had turned the fight around with the amphibious landing in Inchon, which took place in September 1950. The North Korean People's Army (NKPA) tried to contain the Pusan Perimeter invasion, but they broke through, and before long the coalition troops were headed deep into North Korean territory. Some units had reached the Yalu River, which marks the frontier between North Korea and China. At this point, the mission's goal was to eliminate the NKPA and reunite Korea under a pro-Western regime, but the forces under MacArthur's command found themselves surrounded and beleaguered in sub-zero temperatures.
As it turned out, the United States and its allies badly mishandled China's entry into the Korean War, a dramatic and critical development in the conflict that completely changed the balance of power in the theater. The Battle of Chosin Reservoir was one of the most decisive battles that followed, one where both the Americans and the Chinese underestimated their rivals and thought that victory could be achieved easily. As it turned out, nothing was easy at the Chosin Reservoir, and both sides would pay a heavy toll for the miscalculations of their superiors, but the result would mark a major turning point that helped determine how the war ended, and how the map of Asia looks today.
The Battle of Chosin Reservoir: The History of the Chinese Victory that Pushed UN Forces Out of North Korea during the Korean War looks at one of the Korean War's most important fights, from its origins to its aftermath. Along with pictures depicting important people, places, and events, you will learn about the Battle of Chosin Reservoir like never before.

The Battle of Chosin Reservoir: The History of the Chinese Victory that Pushed UN Forces Out of North Korea during the Korean War

The American War in Afghanistan: A History

Everest 1922: The Epic Story of the First Attempt on the World's Highest Mountain

The Amur River: Between Russia and China

No Good Men Among the Living: America, the Taliban, and the War Through Afghan Eyes

Afghanistan: A Cultural and Political History

What the Buddha Taught: Revised and Expanded Edition with Texts from Suttas and Dhammapada

The Great Game: The Struggle for Empire in Central Asia

The Secret History of the Mongol Queens: How the Daughters of Genghis Khan Rescued His Empire

History of the Caucasus: Volume 1: At the Crossroads of Empires

Underground Asia: Global Revolutionaries and the Assault on Empire

Three Tigers, One Mountain: A Journey Through the Bitter History and Current Conflicts of China, Korea, and Japan

Strangers from a Different Shore: A History of Asian Americans Au Of...

The City in Which I Love You

A History of East Asia

A Being So Gentle: The Frontier Love Story of Rachel and Andrew Jackson

Spilling Ink: Covering Asia at the Dawn of New Media

The Life and Times of George Tsarong of Tibet, 1920-1970: A Lord of the Traditional Tibetan State

Kim Jong Un and the Bomb: Survival and Deterrence in North Korea

Handbook of Tibetan Iconometry: A Guide to the Arts of the 17th Century

Poems of the Masters: China's Classic Anthology of t'Ang and Sung Dynasty Verse

After the Korean War

The Anime Machine: A Media Theory of Animation

The Frozen Chosen: The 1st Marine Division and the Battle of the Chosin Reservoir

Mesopotamia: A Captivating Guide to Ancient Mesopotamian History and Civilizations, Including the Sumerians and Sumerian Mythology,

Eagle Down: American Special Forces at the End of Afghanistan's War

Yoga Philosophy of Patanjali: Containing His Yoga Aphorisms with Vyasa's Commentary in Sanskrit and a Translation with Annotations Including Many Su

Carpetbaggers of Kabul and Other American-Afghan Entanglements: Intimate Development, Geopolitics, and the Currency of Gender and Grief

Beyond Versailles: The 1919 Moment and a New Order in East Asia

The Cambridge History of China

Incredible History of the Indian Ocean

Asia in Flanders Fields: Indians and Chinese on the Western Front, 1914-1920

From the Ruins of Empire: The Revolt Against the West and the Remaking of Asia

Two Buddhas Seated Side by Side: A Guide to the Lotus S&#363;tra

Ur: A Captivating Guide to One of the Most Important Sumerian City-States in Ancient Mesopotamia

Salt of the Earth: The Political Origins of Peasant Protest and Communist Revolution in China

Unfabling the East: The Enlightenment's Encounter with Asia

The Italian Renaissance and the Origins of the Modern Humanities

Doing the Needful: The Dilemma of India's Population Policy

The City of Blue and White: Chinese Porcelain and the Early Modern World

Three Tigers, One Mountain: A Journey Through the Bitter History and Current Conflicts of China, Korea, and Japan

The Soviet-Afghan War: How a Superpower Fought and Lost

The Sassoons: The Great Global Merchants and the Making of an Empire

Korea and the Fall of the Mongol Empire

When Asia Was the World: Traveling Merchants, Scholars, Warriors, and Monks Who Created the riches of the east

Alone with Others: An Existential Approach to Buddhism

Over the Edge: The True Story of the Kidnap and Escape of Four Climbers in Central Asia

Afghanistan: What Everyone Needs to Know(r)

Has Asia Lost It?: Dynamic Past, Turbulent Future

Afghan Crucible: The Soviet Invasion and the Making of Modern Afghanistan

The Great Synthesis of Wang Yangming Neo-Confucianism in Korea: The Chonon (Testament) by Chong Chedu (Hagok)

A History of the Philippines

Mysteries of the Sacred Universe

By More Than Providence: Grand Strategy and American Power in the Asia Pacific Since 1783

Beyond the Final Score: The Politics of Sport in Asia

Culture and Power in Banaras: Community, Performance, and Environment, 1800-1980

Genghis Khan and the Quest for God: How the World's Greatest Conqueror Gave Us Religious Freedom

History of the Byzantine State

The Holy Warrior: Osama Bin Laden and his Jihadi Journey in the Soviet-Afghan War

Cinema and the Cultural Cold War

Mongol Caucasia: Invasions, Conquest, and Government of a Frontier Region in Thirteenth-Century Eurasia (1204-1295)

Two Buddhas Seated Side by Side: A Guide to the Lotus S&#363;tra

Zoroastrian Scholasticism in Late Antiquity: The Pahlavi Version of the Yasna Hapta&#331;h&#257;iti

History of East Asia: A Captivating Guide to the History of China, Japan, Korea and Taiwan

The Bleeding Wound: The Soviet War in Afghanistan and the Collapse of the Soviet System

Ashes of a Lost Country

Gender and Sexuality in Modern Japan

Defying the Dragon: Hong Kong and the World's Largest Dictatorship

Resistance and Revolution in China: The Communists and the Second United Frontvolume 11

The Buddha's Footprint: An Environmental History of Asia

From Mountains to Skyscrapers: The Journey of the Iu Mien

Salt of the Earth: The Political Origins of Peasant Protest and Communist Revolution in China

An Urban History of China

The Other Side of the Mountain: Mujahideen Tactics in the Soviet-Afghan War

One Day Too Long: Top Secret Site 85 and the Bombing of North Vietnam

Riots and Victims: Violence and the Construction of Communal Identity Among Bengali Muslims, 19051947

We Shall Be Masters: Russian Pivots to East Asia from Peter the Great to Putin

The Progressive Maharaja: Sir Madhava Rao's Hints on the Art and Science of Government

Trade and Civilisation in the Indian Ocean: An Economic History from the Rise of Islam to 1750

Violence and the Rise of Centralized States in East Asia

The Sewing Circles of Herat: A Personal Voyage Through Afghanistan

How the East Was Won

The Dragon Looks South: China and Southeast Asia in the New Century

An Atlas of the Tibetan Plateau

Traumatic Pasts in Asia: History, Psychiatry, and Trauma from the 1930s to the Present

Unfabling the East: The Enlightenment's Encounter with Asia

A History of Christianity in Asia: Volume I: Beginnings to 1500

China Among the Nations of the Pacific

Qarakhanid Roads to China: A History of Sino-Turkic Relations

Pearl of the Desert: A History of Palmyra

Into the Land of Bones: Alexander the Great in Afghanistanvolume 47

How to Trace Your Irish Ancestors: An Essential Guide to Researching and Documenting the Family Histories of Ireland's People

Scholars and Their Marginalia in Late Imperial China

Strait Talk: United States-Taiwan Relations and the Crisis with China

Amulets and Talismans of the Middle East and North Africa in Context: Transmission, Efficacy and Collections

Through the Jade Gate - China to Rome: Volume II

An Urban History of China

The Great Exodus from China

Healing at the Periphery: Ethnographies of Tibetan Medicine in India

A People's History of the Hmong

Treasure Trove of Benefits and Variety at the Table: A Fourteenth-Century Egyptian Cookbook: English Translation, with an Introduction and Glossary

Defenders of Japan: The Post-Imperial Armed Forces 1946-2016, a History

Colonial Project, National Game: A History of Baseball in Taiwanvolume 6

Spilling Ink: Covering Asia at the Dawn of New Media

Asian Tragedies in the Americas: Chinese, Japanese, and Korean Stories

The Buddhist Goddess Marishiten: A Study of the Evolution and Impact of Her Cult on the Japanese Warrior

History of East Asia: A Captivating Guide to the History of China, Japan, Korea and Taiwan

Enlightened Rainbows: The Life and Works of Shardza Tashi Gyeltsen

Religions of the Silk Road: Premodern Patterns of Globalization

The Rising Tide of Color Against White World-Supremacy

A History of Malaysia

The Making of Buddhist Modernism

Asia as Method: Toward Deimperialization

A History of Asia

Silk, Slaves, and Stupas: Material Culture of the Silk Road

Building a Religious Empire: Tibetan Buddhism, Bureaucracy, and the Rise of the Gelukpa

Through the Jade Gate- China to Rome: Volume I

Silk Through the Ages: The Textile That Conquered Luxury

Book of My Nights

Warriors of the Steppe: Military History of Central Asia, 500 BC to 1700 Ad