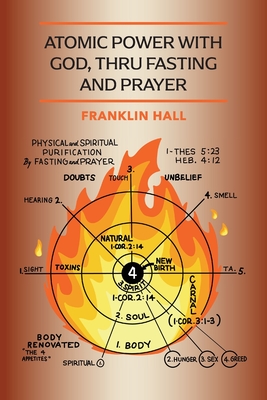 Atomic Power With God Thru Fasting and Prayer is a short work by the spirited evangelist Franklin Hall. The book describes how prayer during extended fasts can heal the body and soul, and bring practitioners greater spiritual power to exalt and glorify Jesus Christ.

Franklin Hall was born in Coffeyville, Kansas, in 1909. Hall's father died when Franklin was only twelve, leaving him distraught with both his loss and the responsibility of supporting his mother and five younger siblings. During these hard times, he looked to the local Pentecostal church for guidance. The church became a major influence on the lives of the young Hall children and their widowed mother, who remarried the reverend soon after.

Hall began his own traveling ministry during the Great Depression. But he didn't become well known among evangelicals until the release of his first book, Atomic Power With God Thru Fasting and Prayer, in 1946.

In the book, Hall described his own introduction to fasting and prayer through friendship with a Oklahoma family advocating the practice in 1932. He fasted and prayed with them in anticipation of a large revival-and at the ensuing event, scores of people were healed of all types of afflictions.

He became convinced of the power of fasting and began to preach its efficacy as he traveled. In 1946, a group of Holy Ghost people began a long session of prayer and fasting, lasting between ten and forty days. According to Hall, they experienced a great spiritual awakening. Some even found healing of physical ailments during the fast. As word of the event spread, Hall found that there was heavy demand for more information about the power of fasting and prayer.

Later that same year, Hall wrote Atomic Power. The book explores how fasting intensifies prayer by [bringing] unity and [filling] us with the glory of God. Through the combination of these two acts, he believed one could enhance their spiritual appetites and curtail their hunger, sex, and greed appetites-thereby uncovering their spiritual atomic power with God that lies available to every Christian.

Hall acknowledged that fasting and prayer were not new. Beyond the multiple examples from the Bible, and specifically from the life of Christ, he cited the fasting and prayer of Native Americans and Muslims who abstained from food as a regular part of their devotional exercises.

In addition to the why of fasting, the book explained how one should fast. A complete fast, Hall wrote, should last from the time hunger leaves to the time hunger returns-usually 21 to 40 days. Water should be consumed in abundance to clean out the stomach and intestines of waste. And when it's time to break the fast, Hall provided a detailed breakdown of what to eat and when.

Atomic Power brought success and notoriety to Hall, who continued to travel across the country evangelizing to crowds of up to 5,000 people. Immediately after Atomic Power, he published The Fasting Prayer in 1947 and Glorified Fasting: The ABC of Fasting in 1948. He published a total of 17 books during his lifetime. Hall and his wife, Helen, founded the Hall Deliverance Foundation in the mid-1950s. This alliance of churches and ministries followed Hall's teachings for fasting and prayer. The couple also started Miracle Word, a ministry newsletter that had 24,000 subscribers worldwide at its peak. Some other evangelists and Pentecostals did not agree with Hall's teachings. Still, fasting had staunch believers through the 1950s and beyond, including some notable evangelists like Gordon Lindsay, William Branham, and Orval Jaggers. Hall's work has now been inspiring Christians to explore the benefits of fasting on their physical and spiritual health for over 70 years.

Atomic Power With God Thru Fasting And Prayer

Atomic Power With God Thru Fasting And Prayer

This Time Around: Three Sweet Romances

The Complete Works of William Shakespeare: Works Include: Romeo and Juliet; The Taming of the Shrew; The Merchant of Venice; Macbeth; Hamlet; A Midsum

When a Stranger Comes to Town

Pity the Reader: On Writing with Style

The Book of Revelation