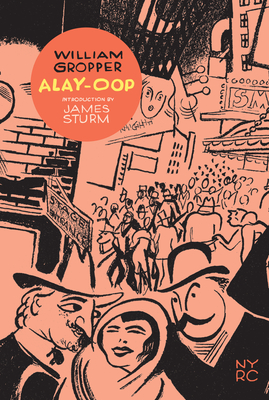 A lost, early classic of the graphic novel, now back in print for the first time since 1930. William Gropper was one of the great American cartoonists and illustrators of the twentieth century. A student of George Bellows and Robert Henri, he was a prolific newspaper cartoonist, WPA muralist, Guggenheim Fellow, and committed political activist--the first visual artist called before the House Un-American Activities Committee, after which he was blacklisted (though he got revenge with his pen). He was also a master of visual storytelling, best seen in his only full-length narrative work, Alay-Oop. First published in 1930, just as Gropper was coming to the height of his powers, this lost classic of the graphic novel presents an unusual love triangle: two circus acrobats and the honey-tongued schemer who comes between them. In page after page of charming, wordless art, Gropper takes us from the big top to bustling New York streets, from a cramped tenement apartment to the shifting landscape of a dream, as his characters struggle with the conflicting demands of career, family, and romance. A timeless and surprisingly modern yarn--with backflips aplenty.

Pathfinder Volume 2: Of Tooth and Claw

The New World: Comics from Mauretania

The Adventures of Tintin: Flight 714

Underwinter: A Field of Feathers

Blade of the Immortal Volume 4: On Silent Wings

FBP: Federal Bureau Of Physics Vol. 2: Wish You Were Here

One Piece Box Set 4: Dressrosa to Reverie: Volumes 71-90 with Premium

The Art of Star Wars: Visions

Revenge of the Librarians

The Many Deaths of Laila Starr

The Beginning After the End, Vol. 1 (Comic)