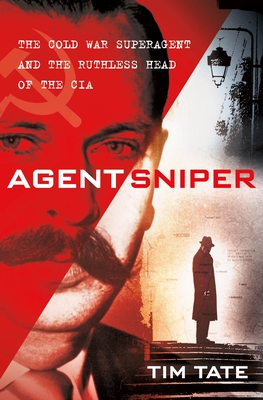 The thrilling never-before-told story of Agent Sniper, one of the Cold War's most effective counter-agents

Michal Goleniewski, cover name Sniper, was one of the most important spies of the early Cold War. For two and a half years at the end of the 1950s, as a Lt. Colonel at the top of Poland's espionage service, he smuggled more than 5,000 top-secret Soviet bloc intelligence and military documents, as well as 160 rolls of microfilm, out from behind the Iron Curtain. In January 1961, he abandoned his wife and children and made a dramatic defection across divided Berlin with his East German mistress to the safety of American territory. There, he exposed more than 1600 Soviet bloc agents operating undercover in the West--more than any single spy in history. The CIA called Goleniewski one of the West's most valuable counterintelligence sources, but in late 1963, he was abandoned by the US government because of a split in the agency over questions about his mental stability and his trustworthiness. Goleniewski bears some of the blame for his troubled legacy. He made baseless assertions about his record, notably that he was the first to expose Kim Philby. He also bizarrely claimed to be Tsarevich Aleksei Romanoff, heir to the Russian Throne who had miraculously survived the 1918 massacre of his family. For more than fifty years, American and British intelligence services have sought to erase Goleniewski from the history of Cold War espionage. The vast bulk of his once-substantial CIA and MI5 files remain closed. Only fragments of his material crop up in the de-classified dossiers on the KGB spies he exposed or the memoirs of CIA officers who dealt with him. A never-before-told story, Tim Tate's Agent Sniper is a crackling page-turner that takes readers back to the post-war world and a time when no one was what they seemed.

The Gates of Europe: A History of Ukraine

Nothing Is True and Everything Is Possible: The Surreal Heart of the New Russia

Odessa: Genius and Death in a City of Dreams

All the Kremlin's Men: Inside the Court of Vladimir Putin

Stalking the Atomic City: Life Among the Decadent and the Depraved of Chornobyl

The Empress and the English Doctor: How Catherine the Great Defied a Deadly Virus

Winter Is Coming (Intl PB Ed): Why Vladimir Putin and the Enemies of the Free World Must Be Stopped

The Human Factor: Gorbachev, Reagan, and Thatcher, and the End of the Cold War

The Volga: A History

The Long Telegram: A 1946 Call for Containment of the Soviet Union

Lenin's Tomb: The Last Days of the Soviet Empire

The Great Game: The Struggle for Empire in Central Asia

The Ukrainian and Russian Notebooks: Life and Death Under Soviet Rule

The Cold War: A World History

Babi Yar: A Document in the Form of a Novel

Ukraine: A Nation on the Borderland

Russia Upside Down: An Exit Strategy for the Second Cold War

Empire: The Russian Empire and Its Rivals

The Russian Revolution: A New History

From Julietts to Yasens: Development and Operational History of Soviet Nuclear-Powered Cruise-Missile Submarines, 1960-1994

Like a Drop of Ink in a Downpour: Memories of Soviet Russia

A People's Tragedy: A History of the Russian Revolution

Stalin: The Court of the Red Tsar

Ukraine and the Art of Strategy

Lost Kingdom: The Quest for Empire and the Making of the Russian Nation

A Spy Among Friends: Kim Philby and the Great Betrayal

The Legend of the Linden: A History of Slovakia

Isle and Empires: Romanov Russia, Britain and the Isle of Wight

Nuclear Folly: A History of the Cuban Missile Crisis

Between Two Fires: Truth, Ambition, and Compromise in Putin's Russia

The State and Revolution

Toward a Concrete Utopia: Architecture in Yugoslavia, 1948-1980

The State and Revolution: Lenin's explanation of Communist Society

The Origins of the Slavic Nations: Premodern Identities in Russia, Ukraine, and Belarus

The New Tsar: The Rise and Reign of Vladimir Putin

The Katyn Massacre 1940: History of a Crime

The Oligarchs: Wealth and Power in the New Russia

The Long Song of Tchaikovsky Street: A Russian Adventure

The Glass Wall: Lives on the Baltic Frontier

Faustian Bargain: The Soviet-German Partnership and the Origins of the Second World War

A Small Corner of Hell: Dispatches from Chechnya

Last War of the World-Island: The Geopolitics of Contemporary Russia

Between East and West: Across the Borderlands of Europe

The Long Hangover: Putin's New Russia and the Ghosts of the Past

Last Witnesses: An Oral History of the Children of World War II

Inside the Mind of Vladimir Putin

Russia in the Age of Alexander II, Tolstoy and Dostoevsky

The Harvest of Sorrow: Soviet Collectivization and the Terror-Famine

The Shortest History of the Soviet Union

What Is To Be Done?

Lost Splendor: The Amazing Memoirs of the Man Who Killed Rasputin

The Crimean War: A History

Mastering the Art of Soviet Cooking: A Memoir of Food and Longing

A Concise History of Russia

The Kingdom of Rye: A Brief History of Russian Foodvolume 77

The Tsarina's Lost Treasure: Catherine the Great, a Golden Age Masterpiece, and a Legendary Shipwreck

Seward's Folly: A New Look at the Alaska Purchase

Rasputin: Faith, Power, and the Twilight of the Romanovs

The Romanov Sisters: The Lost Lives of the Daughters of Nicholas and Alexandra

The Russian Revolution: A View from the Third World

Peter the Great: His Life and World

The Private Life of the Romanoffs

The Red Atlas: How the Soviet Union Secretly Mapped the World

Khrushchev: The Man and His Era

I Named My Dog Pushkin (And Other Immigrant Tales): Notes From a Soviet Girl on Becoming an American Woman

Journeys Through the Russian Empire: The Photographic Legacy of Sergey Prokudin-Gorsky

To Break Russia's Chains: Boris Savinkov and His Wars Against the Tsar and the Bolsheviks

A Failed Empire: The Soviet Union in the Cold War from Stalin to Gorbachev

The Sámi Peoples of the North: A Social and Cultural History

Ten Days That Shook the World

The Holocaust by Bullets: A Priest's Journey to Uncover the Truth Behind the Murder of 1.5 Million Jews

Masterpieces and Dramas of the Soviet Championships: Volume II (1938-1947)

Execution by Hunger: The Hidden Holocaust

The 900 Days: The Siege of Leningrad

Romanovs: A Captivating Guide to the Romanov Dynasty that Ruled Russia From 1613 Until the Russian Revolution and the Life of Ni

A Backpack, a Bear, and Eight Crates of Vodka: A Memoir

The House of Government: A Saga of the Russian Revolution

Operation Barbarossa and Germany's Defeat in the East

Lenin: The Man, the Dictator, and the Master of Terror

One Minute to Midnight: Kennedy, Khrushchev, and Castro on the Brink of Nuclear War

The Golden Age Shtetl: A New History of Jewish Life in East Europe

The Sabres of Paradise: Conquest and Vengeance in the Caucasus

Manual for Survival: An Environmental History of the Chernobyl Disaster

History of the Russian Revolution

Stuff of Soldiers: A History of the Red Army in World War II Through Objects

The Struggle Against the State and Other Essays