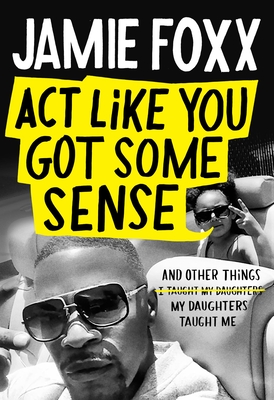 From Academy Award-winning multi-talent Jamie Foxx, a hilariously candid look at the joys and pitfalls of being the father of two daughters.

Jamie Foxx is not only an actor, comedian, and musician, he's also starring in his most humbling and long-running role yet as father to two independent girls: Corinne and Anelise. While his daughters have very different views on the world, there is one thing they can agree on: Dad gets on their motherf***ing nerves. Though every day with his girls brings hurdles and hilarity, he's learned a lot along the way. In ACT LIKE YOU GOT SOME SENSE--a title inspired by his beloved and fierce grandmother--Jamie reveals his rocky parenting journey through priceless stories about the tough love and old-school values he learned growing up in the small town of Terrell, Texas; his early days trying to make it in Hollywood; and life after achieving stardom. You would think being an A-lister would ease his dad-duty struggles, but if anything, it has only made things more complicated. It seems that a teenage girl who just wants to blend in with her friends will not be excited to see her dad's flashy new convertible at the front of the carpool lane. Hilarious, poignant, and always brutally honest, ACT LIKE YOU GOT SOME SENSE is Jamie Foxx like we've never seen him before, dealing with problems he never imagined he'd have.

ACT Like You Got Some Sense: And Other Things My Daughters Taught Me (Large Print Edition)

ACT Like You Got Some Sense: And Other Things My Daughters Taught Me

Not All Diamonds and Rosé: The Inside Story of the Real Housewives from the People Who Lived It

Paint My Name in Black and Gold

How to Save a Life: The Inside Story of Grey's Anatomy

Road to Wonder: Finding the Extra in Your Ordinary

Apparently There Were Complaints: A Memoir

Miss Me with That: Hot Takes, Helpful Tidbits, and a Few Hard Truths

Made for This Moment: Standing Firm with Strength, Grace, and Courage

How to Be Golden: Lessons We Can Learn from Betty White

Tied Up in Knotts: My Dad and Me

Things I Should Have Said

Here We Go Again: My Life in Television

Twisted Business: Lessons from My Life in Rock 'n Roll

Hangin' with Winners: A Lifetime of Connections, Anecdotes and Lessons Learned

The Beatles in Los Angeles: Yesterday, Today, and Tomorrow

The Measure of a Man LP (Large Print Edition)

The Boys: A Memoir of Hollywood and Family (Large Print Edition)

Dirt: Adventures in Lyon as a Chef in Training, Father, and Sleuth Looking for the Secret of French Cooking

In the Heights: Finding Home

Desilu: The Story of Lucille Ball and Desi Arnaz

The Little Guide to Betty White: Everybody Needs a Passion

Dispatches from the Edge: A Memoir of War, Disasters, and Survival

Being and Becoming: A Memoir

Honky in the House: Writing & Producing The Jeffersons

I'll Be There for You: The One about Friends

It Never Ends: A Memoir with Nice Memories!

Good Neighbor: The Life and Work of Fred Rogers

Sinatra and Me: In the Wee Small Hours

Life Beyond Measure: Letters to My Great-Granddaughter

Wes Craven: The Man and His Nightmares

When Marilyn Met the Queen: Marilyn Monroe's Life in England

Big Noise from LaPorte: A Diary of the Disillusioned

As I Knew Him: My Dad, Rod Serling

Everything I Need to Know I Learned from Dolly Parton: Country Wisdom for Life's Little Challenges

The Essential Directors: The Art and Impact of Cinema's Most Influential Filmmakers

My Name's Yours, What's Alaska?: A Memoir

The Gucci Mane Guide to Greatness

The Marble Faun of Grey Gardens: A Memoir of the Beales, the Maysles Brothers, and Jacqueline Kennedy

Quentin Tarantino: The Iconic Filmmaker and His Work