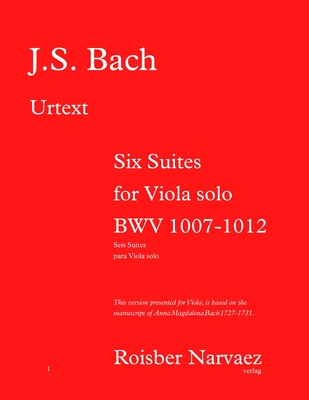 Composed by Johann Sebastian Bach (1.685-1.750) URTEXT Adaptation for viola, edited and transcribed by Roisber Narvaez Throughout history numerous musicians have had discrepancies between arcades, articulations, notation and phrasing for the execution of the six Solo Cello Suites BWV 1007-1012 by Johann Sebastian Bach who wrote around 1720 during his performance as a chapel master in the court of Cöthen. It is quite certain that the Suites were intended to form a second part of a collection or a larger complex of which the first part is composed of the work Sonatas and Partitas for solo violin, BWV 1001-1006, dated in 1720 with the Bach's own hand. The absence of an autograph copy of the composer does not make it possible to have an accurate answer on how the work should be interpreted accurately, caused by the inequality between the four existing manuscripts:1: a copy prepared by his wife Anna Magdalena between 1727 and 1731.2: a copy prepared by Johann Peter Kellner in 1726.3: a copy prepared by two anonymous written in the middle of the 18th century.4: an anonymous copy dating from the end of the 18th century.This has given players the opportunity to contribute musical ideas about the Suites. However, this version presented for Viola, is based on the manuscript of Anna Magdalena Bach 1727-1731.

The Laws Guide to Nature Drawing and Journaling

Love in the Wild Board Book

After Dinner Amusements: How Well Do You Know Me?: 50 Questions for Family and Friends (Dinner Party Gifts, Games for Adults, Games for Dinner Parties

Hokusai Hiroshige and Others

642 Tiny Things to Draw: (Drawing for Kids, Drawing Books, How to Draw Books)

2 of a Kind Double Ended Color

After Dinner Amusements Which

Bookmarks Are for Quitters Beaded Bookmark

What is narrative therapy?: An easy-to-read introduction

Teen Titans Go Coloring book: Exclusive Illustrations For Adults and Kids, A Perfect Coloring Book For Everyone To Color, Develop Critical Skills, A

A Narrative of the Life of David Crockett

Bookmarks Are for Quitters Socks

Crystals: The Stone Deck: 78 Crystals to Energize Your Life (Crystals and Healing Stones, Crystals for Beginners, Protection Crystals and Stones

Prism Oracle: Tap Into Your Intuition with the Magic of Color

The Spells Deck: 78 Charms, Remedies, and Rituals for the Modern Mystic

Flying Pig Plush: A Companion to the Children's Book Maybe

The Lost Ways: Prepare To Survive In Emergencies

Deep and deliberate delegation: A new art for unleashing talent and winning back time

The Power of Character Strengths: Appreciate and Ignite Your Positive Personality

After Dinner Amusements Do You