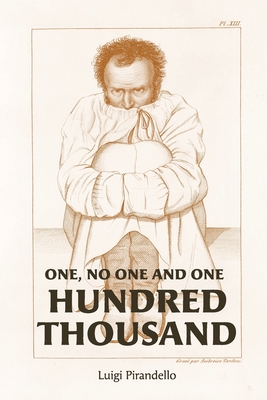 After all, the Moscarda he believed himself to be was different when he was alone, or with his wife, his tenant, or his friends. And there were hundreds--no, thousands--of additional Moscardas in the minds of everyone who had met or heard of him.

So he decided, in his own words, to ...ﬁnd out who I was, at least to those closest to me, acquaintances so-called, and to amuse myself by maliciously decomposing the I that I was to them. What follows is a series of experiments, meant to befuddle and confuse those around him and prove that he was not, in fact, who they believed him to be.

Written by Nobel Laureate Luigi Pirandello over the course of 15 years, One, None, and One Hundred Thousand was a groundbreaking look at the nature of identity and the self.

Pirandello was no stranger to reinvention and loss of identity. Born into a well-to-do Sicilian family, he seemed destined to follow his father into business as a sulfur merchant. Instead, he spent his youth writing stories, and later excelled in literary studies.

Pirandello's early writing and teaching at the Istituto Superiore di Magistero di Roma was sufficient to support himself, his wife, and his three children--supplemented by an allowance from his father and his wife's dowry.

But in 1903, the family was ruined when the sulfur mines his father had invested in were flooded and destroyed. The family fortune was gone, including his wife's dowry. The news so shocked her that she suffered a complete mental collapse. In the aftermath, she suffered from hallucinations and anxieties that would follow her for the rest of her life.

At first, with an ailing wife and no money, Pirandello contemplated suicide. Instead, he redoubled his efforts. He took on more teaching work and wrote at a furious pace. He would go on to write 7 novels, numerous short stories, poetry, and around 40 plays throughout his career.

The issue of identity comes up again and again in Pirandello's work. In his play To Clothe the Naked, the protagonist tries to reinvent herself, with each subsequent identity stripped away from her by others. In The Life I Gave You, a mother is confronted with the truth that her long-lost son is not the person that she has created in her mind. In the end, she chooses to adhere to her fiction rather than face the facts about her son.

In Six Characters in Search of an Author, Pirandello's most famous work, six unused and incomplete characters walk onto a stage and demand that a director and his actors tell their stories. But of course, the lines between reality and invention are blurred, getting more absurd as the play goes on. This play created such a stir on opening night in Rome that fighting broke out in the audience, forcing Pirandello to flee the theater with his daughter. Later that year, the same play would be hailed by critics in Milan as a work of genius.

Pirandello's work was later seen as a precursor to the Theatre of the Absurd, in which writers explore the meaninglessness of human existence through deliberately confusing situations and purposeless dialogue.

By the time of his death in 1936, Pirandello was a well-known and respected writer in the theater and literary worlds. Although his name wouldn't be recognized by many today, his contributions to literature can be seen in the later work of notable writers like Jean-Paul Sartre and fellow Nobel Prize winner Samuel Beckett, among others.

The Importance of Being Earnest and Other Plays

The Revelation of Jesus Christ!: Seven Years That Changes Our World Forever!

'Trifles' and 'A Jury of her Peers'