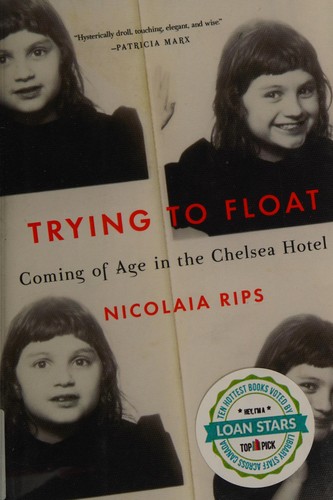 Trying to Float: Coming of Age in the Chelsea Hotel

Hysterically droll, touching, elegant, and wise--a coming-of-age story from someone who possibly came of age before her parents (Patricia Marx, New Yorker writer and bestselling author), Trying to Float is a seventeen-year-old's darkly funny, big-hearted memoir about growing up in New York City's legendary Chelsea Hotel. New York's Chelsea Hotel may no longer be home to its most famous denizens--Andy Warhol, Leonard Cohen, Patti Smith, to name a few--but the eccentric spirit of the Chelsea is alive and well. Meet the family Rips: father Michael, a lawyer turned writer with a penchant for fine tailoring; mother Sheila, a former model and renowned artist who matches her welding outfits with couture; and daughter Nicolaia, a precocious high school junior at work on a record of her peculiar seventeen years. Nicolaia is a perpetual outsider who has struggled to find her place in public schools populated by cliquish girls and loudmouthed boys. But at the Chelsea, Nicolaia need not look far to find her tribe. There's her neighbor Stormé, a tall woman who keeps a pink handgun strapped to her ankle; her babysitter, Jade, who may or may not have a second career as an escort; her friend Artie, former proprietor of New York's most famous nightclubs. The kids at school might never understand her, but as Nicolaia endeavors to fit in she begins to understand that the Chelsea's motley crew could hold the key to surviving the perils of a Manhattan childhood. Not since Holden Caulfield has there been such a fabulously compelling teen guide to New York City: Nicolaia Rips's debut is a disarming, humble, heartfelt, and wise tale of coming-of-age amid the contradictions, complexities, and shifting identities of life in New York City. A bohemian Eloise for our times, Trying to Float is a triumphant parable for the power of embracing difference in all its forms.