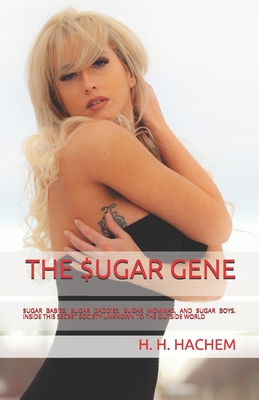 The $ugar Gene: $ugar Babies, $ugar Daddies, $ugar Mommas, and $ugar Boys. Inside This Secret Society Unknown to the Outside World

$ugar! Since the early 1900s, $ugar Daddies and $ugar Babies have roamed this earth looking to live their best life by seeking circumstances that are beyond their grasp in most normal environments. Regardless of what most people would think, this is a ridiculously small world. The world of $ugar exists to less than 0.03% of the population in this world. If you were to approach 10,000 people in your lifetime and ask them about $ugar, it's a good bet that most of them would understand the topic. But as far as those same people living that life, maybe only 3 people out of those 10,000 would have some sort of real experience with that lifestyle. You might take this as a bold statement, and it just may be bold, but it's also accurate. How would you know if someone you met has the $ugar Gene? The simplest way to explain it is like this. If a man is willing to pay another person for their sex, time, and/or companionship, then he has the $ugar Gene. If a woman is willing to give sex, time, and/or companionship to another person in exchange for some sort of monetary value, then she also has the $ugar Gene. Knowing these 2 pieces of information makes it easier to understand what it takes to live the $ugar lifestyle. There are many men in this world who will not provide financial help in exchange for any sort of companionship. They are either too cheap or just see it as a waste of money. On the other hand, there are many women in this world that will not give up their bodies or their time in exchange for financial help. Their ego simply won't allow it. In the modern world we live in today, you see all sorts of '$ugar' dating websites that are available to those seeking this sort of arrangement. Less than 50% of people on these sites will ever go through with it and go on a date. That doesn't mean that these sites aren't useful. In fact, they are especially useful, and they are a great way for a person to penetrate the world of $ugar. As a person who may be trying to get started, joining websites like these will be extremely helpful and educational. On top of that, many of these sites have educational tools and information to better help their subscribers understand how to go about it. For beginners, joining websites like these might be the best way to start, by jumping right in. It's not enough to say that a person who is willing to join a $ugar dating site is a person that has the $ugar Gene. That person would have to be willing to go through with some sort of financial arrangement where time or companionship is compensated financially in some way. Whether you are a man looking for someone to have 'fun' with or a woman looking to make some extra cash, you don't truly have the $ugar Gene unless you are willing to take that final step and either 'pay or put out.' This may sound like a harsh way of putting things, but it's the truth. If you are not comfortable with either side of it, then this lifestyle is not for you. Before going further, we need to address the topic of prostitutes and johns. It could be stated that these 2 types of people have the $ugar Gene. But they don't. For prostitutes, they are businesspeople looking for an exchange, money for sex. Some of them do have the $ugar Gene, but not many. There are a lot of prostitutes in this world that absolutely will not give up their private time to a $ugar Daddy. They will go to work, and then go home. Some of them do accept extra money and gifts from their clients, but they are careful to stay an arm's length away as well. A prostitute will normally not want to take things further with their clients for fear of being stalked and/or threatened. They are very well versed in the ways that men behave and how childish many of them can be when they don't get their way with a woman. Real $ugar is the willingness to make some sort of commitment to another person, and a textbook prostitute will not do that.

The Story of Libraries, Second Edition: From the Invention of Writing to the Computer Age

Ripley's Believe It or Not! Escape the Ordinary

The World Almanac and Book of Facts 2023

You Too Can Be Prosperous: The Spiritual Secrets of Abundance and Prosperity

Interplay: The Process of Interpersonal Communication

Rhyme's Rooms: The Architecture of Poetry

Unofficial Ancestry.com Workbook: A How-To Manual for Tracing Your Family Tree on the #1 Genealogy Website

Writer's Market 100th Edition: The Most Trusted Guide to Getting Published

Democratic Rules of Order: Easy-To-Use Rules for Meetings of Any Size

The Weeding Handbook: A Shelf-By-Shelf Guide

Madrigal's Magic Key to Spanish: A Creative and Proven Approach

The Madman's Library: The Strangest Books, Manuscripts and Other Literary Curiosities from History

The Book of Phobias and Manias: A History of Obsession

The Fine Art of Small Talk: How to Start a Conversation, Keep It Going, Build Networking Skills -- And Leave a Positive Impression!

Hearts Under the Headsets: Enhancing Resilience for Telecommunications Professionals

The Creative Habit: Learn It and Use It for Life

The Complete Book of Speech Communication: A Workbook of Ideas and Activities for Students of Speech and Theatre

Bored Games: 100+ In-Person and Online Games to Keep Everyone Entertained